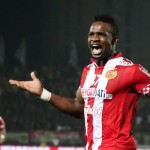 The 6ft 1in Nigeria U23 international believes he will secure a move to the Premier League soon.

He told AfricanFootball: “It has been my dream to play for Arsenal, they came for my while I was at Warri Wolves and I think it was money that truncated the whole thing.

“By now I should be playing for Arsenal or any team in England.

“I am happy that a coach like Wenger has interest in me for long, still keeps his eyes on me and has not lost interest.

“I believe I am not far away from my dream of playing for Arsenal. He recommended me to Angers. The French team watched me score in Toto Cup semi-finals.”