Reports are out claiming that the agent of Daniele Rugani has blasted Juventus over their treatment of the young defender. 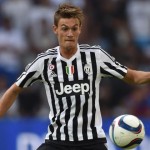 The Italian centre back has battled for minutes at Juve this season.

“Juve continue to declare how important he is, but yesterday (against Hellas Verona) with Barzagli out it was (Martin) Caceres who played,” agent Davide Torchia told Radio Crc.

“This decision left me rather perplexed, seeing as the lad did so well in the Coppa Italia. In any case, I hope the club will keep its word, seeing as it claims Rugani is the first choice after that trio.

Premier League giants Manchester United and Arsenal are said to be monitoring the young defender’s situation at Juventus.

Fabregas : I Will Shout At Team Mates If I Have To