It has been reported that former Manchester United midfielder Anderson is being linked with a move to China. 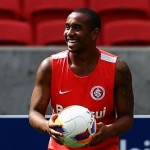 The Mirror claims that Anderson could be on the move again this month.

The Brazilian returned to his homeland with Internacional a year ago, after his career in the Premier League petered out.

He restored a little of the lost lustre in Porto Alegre, doing enough to attract interest from China.

Hebei Fortune have already had a £4.3million offer rejected by Inter, but are expected to make an improved offer in the coming days.