Reports are out claiming that Arsenal legend Paul Merson has expressed his surprise at the club’s imminent signing of FC Basel midfielder Mohamed Elneny. 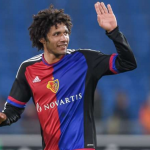 The former Gunners star concedes that he was hoping for a more high-profile signing who can have an impact in the North London club’s chase for an elusive Premier League title.

“I thought they would go for a real key signing,” Merson told Sky Sports.

“Someone for £30m-odd. I don’t think he’ll go straight in the team, instead he’ll be a squad player for the games coming up.

“It depends how quickly he settles, though.”