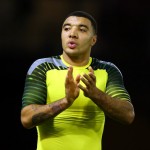 Deeney, 27, admitted he was intrigued by speculation linking him to the Gunners.

He said: “It’s very flattering – my son Myles is an Arsenal fan and he read it in the paper the other day with mum.

“I don’t think he is very happy I’m staying at Watford. He thinks it’s like FIFA and you can change clubs on the same day.

“From my point of view, and Iggy’s, people want us and that shows we’ve been doing something right for the past six months, but we’ve got a project to complete here.” Leicester City Not Interested In Selling Ben Chilwell To Arsenal