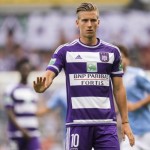 Reports are out claiming thhat Liverpool are keen on Anderlecht midfielder Dennis Praet.

Fiorentina made contact with the Belgian club over a potential move for Praet but were put off by the player’s €30million price tag.

Liverpool would have no issue meeting that valuation and could end up sealing the 21-year-old’s signature.

The talented midfielder is also wanted by Arsenal. Sunderland Not Interested In Selling Stephane Sessegnon To Arsenal, PSG