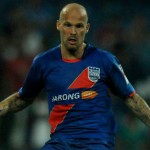 Reports are out claiming that Freddie Ljungberg has returned to Arsenal as a coach with the club’s youth system.

Ljungberg, who was part of the ‘Invincibles’ team of 2004, will coach the club’s U14 and U15 squads as part of his work towards obtaining a UEFA license.

The former Sweden international confirmed the news on Twitter saying: “Hope everyone had a happy new year. Enjoying my last week in Cape Town before I go home to coach Arsenal’s U15! V excited :-)”

Gunners boss Arsene Wenger said: “He wants to get his license and we are happy to give him the chance to do that.”