Reports are out claiming that Arsenal boss Arsene Wenger insists he wants to keep hold of David Ospina. 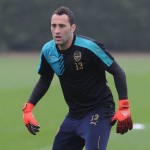 The Colombia No1 has been linked with a move away this month.

But Wenger says: “I personally think he is world-class,” Wenger said. “I did not take Petr Cech based on the performances of Ospina. Petr Cech was just an exceptional opportunity where it was difficult to say no. It was not because I was unhappy with Ospina.

“I was very happy with Ospina. Unfortunately, Ospina has been punished by that decision to sign Cech, but I rate him highly. True he had a bad season because he has that mistake [against Olympiacos] and when you do not have many opportunities and you have one bad catch, everyone is after you.

“If you look at his performances from January to the end of last season, he saved us in many games. We are lucky because he has a top attitude, very intelligent, very brave, very quick. The difference with Cech is that he has less experience and his size. Cech is so tall that when he stretches he covers more surface.

“When you have two good players you have always a chance to make the right decision. I think Ospina can be the goalkeeper of the future here as well. With Petr Cech getting older, David may get more games as well.

“I have written an article for our magazine on goalkeepers. It is a special position, it is an underrated and unfair position – a striker always gets more credit than a goalkeeper.

“A goalkeeper keeps you three times in a game, a striker scores a goal in a 1-0 win and even if he misses four chances the next day everyone speaks of the striker and forgets that the goalkeeper saved you the game.”