Reports are out claiming that Arsenal boss Arsene Wenger was delighted with their FA Cup win over Sunderland. 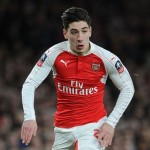 Jeremain Lens put the visitors ahead after a mix-up between Kieran Gibbs and Laurent Koscielny but Joel Campbell levelled before the break before second-half strikes from Aaron Ramsey and Olivier Giroud saw the holders through.

Wenger feels his squad are ready to deal with a tough run.

“There is a little bit,” he said when asked about fixture congestion.

“But I believe that the next step is to get (Tomas) Rosicky back, (Danny) Welbeck back, (Alexis) Sanchez back, (Jack) Wilshere back and maybe we will get one player in.

“Overall, I think we have no new injuries so I’m not worried. If we had the same number of injuries we would be a bit short.”

Hector Bellerin was outstanding on the day.

When asked if Bellerin was the best in his position, Wenger replied: “I don’t know. Of course (he is among the best).

“Look at the defensive and offensive numbers. The fact that he is only 20 years old, there is a lot more to come from him.

“He became stronger and stronger during the game. Sometimes I felt in the last 20 minutes, every time he went forward he created a chance on goal.”