It has been reported that Lazio midfielder Felipe Anderson cannot rule out leaving this month. 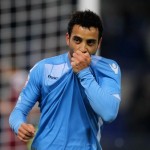 The Brazilian midfielder is being linked with Manchester United.

Anderson has fuelled speculation he could be joining United after admitting: “I don’t what the future holds.”

The Lazio star has been strongly linked with a €50million move to Old Trafford.

And when asked by Sky Italia whether he would still be at the Stadio Olimpico in February, he replied: “I don’t know. For now I’m just concentrating on my job.” Granit Xhaka : I Know Nothing Of Manchester United Interest