Reports are out claiming that Manchester United are maintaining a watching brief for Benfica winger Goncalo Guedes. 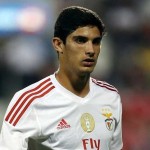 The Daily Star Sunday says the 19-year-old, who is already valued at £45m, has also been watched FIVE times by Chelsea.

Guedes has been dubbed ‘the next Cristiano Ronaldo’ and is being chased by a host of big clubs.

Arsenal, Liverpool and Manchester City as well as Paris St-Germain and Bayern Munich have all shown interest.

Guedes has been on Benfica’s books since he was eight but hates the comparison with his countryman Ronaldo.

Guedes is contracted to Benfica until 2021 and has a colossal £45m release clause.