Reports are out claiming that Dynamo Kiev winger Andriy Yarmolenko is back on Everton’s transfer radar. 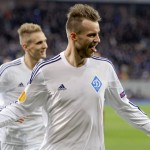 The Mail on Sunday reported that the Ukrainian international, 26, has been a long-standing target for Everton boss Roberto Martinez, who is now worried that his side will miss out on Yarmolenko if they wait until the summer and he then has an impressive Euro 2016.

Kiev are due to play Manchester City in the last 16 of the Champions League and Yarmolenko will only be allowed to leave if club president Igor Surkis allows it.

Everton’s chief scout Kevin Reeves has regularly watched his games over a long period of time.

Arsenal and Barcelona are also said to be keeping tabs on the talented winger.