It has been revealed that Manchester City won’t stand by in the battle for wantaway Chelsea star Eden Hazard. 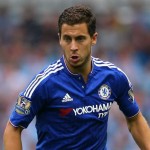 The Sun claims that City will join the fight for Hazard if he leaves Chelsea in the summer.

City will battle it out with PSG and Real Madrid for the Belgian, though Manchester United are also keen.

Hazard is expected to push to leave Chelsea in June.

Though Dad, Thierry, insists Eden is only focused on doing well for the Blues this season.