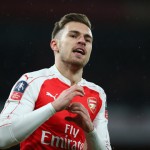 Reports are out claiming that Barcelona are watching Arsenal midfielder Aaron Ramsey.

The Daily Express reported that Barcelona, who were prevented by FIFA from making signings in two transfer windows after being found guilty of irregularities, are determined to come back with a bang.

Boss Luis Enrique is a big fan of Ramsey – and Gunners manager Arsene Wenger is well aware of it.

Wenger could cash in to fund his own spending spree.