Reports have emerged claiming that Arsenal are in talks with PSG midfielder Adrien Rabiot. 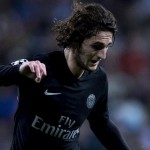 It is said that the midfielder’s agent flew into London to discuss a £15m move.

Rabiot has found first-team opportunities limited in Paris after being edged out the team by Marco Verratti.

He is an established part of the France Under-21 side but is desperate for more first-team football to stake a late claim to star at Euro 2016.

The 20-year-old is a long-term Arsenal target and has recently voiced his desire to leave PSG.