Reports are out claiming that Manchester United are moving for Atletico Madrid midfielder Saul Niguez. 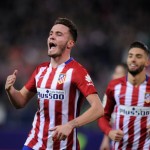 Radio COPE reported that United have made a £15million bid for the Atletico Madrid midfielder.

The 21-year-old has also been linked with a move to Arsenal in recent months, but United are ready to test Atleti’s resolve.

He was poised for a move to the Gunners last month, but his club pulled out of the deal after Tiago Mendes broke his leg.

Niguez has played at all levels of the Spanish youth structure — and even began his career at his club’s city rivals Real Madrid.