Reports are out claiming that Real Madrid and Barcelona have joined Manchester City and Arsenal in the race to sign Schalke 04 attacking midfielder Leroy Sane. 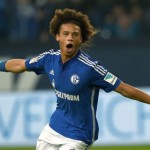 German publication Kicker is reporting the Spanish giants have identified the 19-year-old wonder kid as a transfer target for the January window or during the summer.

Sane has been on City’s radar for some time but they now face stiff competition for the German international’s signature.

It is understood Schalke have placed a £37million price tag on Sane, a fee which would shatter their club record.

Tomas Rosicky : Arsenal Go Out With Our Heads Held High!