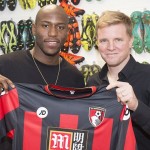 Reports are out claiming that ex-Arsenal striker Benik Afobe’s move from Wolves to Bournemouth for about £10m is the biggest so far this month and has the approval of his former Gunners boss Arsene Wenger.

“Afobe has the qualities to integrate into a team like Bournemouth, whose game is based on movement, pace and quick football,” he said.

“I am very happy for Benik because he had an outstanding attitude here. Sometimes you have to let people go who are not completely ready for us, knowing they could be successful.”