Reports are out claiming that the agent of Marcelo Brozovic has revealed Premier League interest for the Inter Milan midfielder. 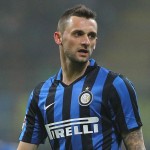 Arsenal have been linked with Brozovic.

Miroslav Bicanic explained to Calciomercato.com : “He was looking for a bigger club than Dinamo Zagreb to prove his potential, and Inter wanted substance and freshness in midfield,”.

“After a year, we can say it was the right decision for both parties. Now he’s a top player. He’s improved to a European level, and has confidence in his ability to further improve.

“Other clubs will see that too, Spanish and English. Premier League clubs know him very well, they believe he can improve a lot in the next few years.

“They also know he’s not cheap though. Marcelo is happy at Inter, he’s playing well, the fans love him and everyone at the club believes in him. Milan is fantastic.

“So we’ll only think of a transfer if Inter give the green light. Until then, he’s focused on Inter matches, and how to get the best possible results this season.”