Reports are out claiming that Jurgen Klopp has hailed Arsenal boss Arsene Wenger as one of the best managers in the world. 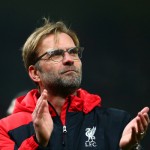 Liverpool will be locking horns against Arsenal at Anfield on Wednesday night and the match is sure to be an enthralling encounter between the two sides as Klopp tests his ‘gegenpressing’ against Wenger’s free-flowing style.

Ahead of the game, Klopp hailed his opposite number Wenger, describing the Frenchman as one of the most competent coaches in world football.

Klopp said: “My respect for Arsene grows day by day because it’s really intensive to work in the Premier League.

“He always had my respect but it’s grown since I’ve been here. He’s done a brilliant job – a high quality manager, one of the best in the world.

“Arsenal together with (Manchester) City are the two best teams in this moment in the Premier League. They will show us they are ambitious this season, they are in a good moment. But Anfield is a good place for football and we shall enjoy it.”