Reports are out claiming that Liverpool manager Jurgen Klopp believes that Premier League leaders Arsenal can be beaten if his side implements the right game plan. 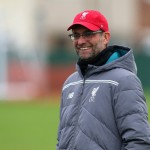 Liverpool play hosts to Arsenal at Anfield on Wednesday night in a blockbuster Premier League encounter, with the inconsistent Reds the underdogs heading into the clash against the league leaders.

Despite not being fancied, Liverpool’s Klopp is looking forward to the encounter and has insisted that his side are capable of beating Arsenal if the right tactics are put into place against Arsene Wenger’s men.

Klopp told reporters ahead of the game: “Arsenal and Arsene have their own style.

“It’s possession football so it’s clear that if we want to play the same way we will be without a chance because they’ve been doing it for longer.

“Arsenal are not only a good possession team, that’s the problem, they have good counter attacks too and that’s what you have to be aware of. It’s a job but it’s a really nice job to think about solutions and how to stop them coming through with their plan. I like things like this.

“They are beatable. Not easy, but it’s possible. We will make a plan for this game and make decisions about the team. We are really looking forward to it. We are excited. It’s always a big challenge to play against a club like Arsenal. But if we have shown something over the past weeks and months, it is that we have a plan against good football playing teams.

“We haven’t had consistency in performances but Stoke away was a good sign of what my team is capable of. We have to produce a very good performance and make a lot of good decisions in the right moment to be successful.”