Reports are out claiming that Javier Hernandez cannot rule out moving away from Bayer Leverkusen. 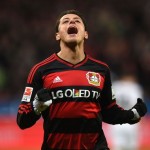 The former Manchester United striker has been linked with Arsenal.

“Look: I’ve played in the last two or three years for Manchester United, Real Madrid and now Leverkusen. In this sport, it does not matter whether you sign for ten, twelve years or annually extend for one season.

“Everything can change after six months. Or you stay for ten years with a club.”

But he also made clear how much he has grown fond of Bayer.

“I’m glad and happy to be in this great club and enjoy the confidence that one has in me. My goal now is to play a very good second half (of the season).”