Reports have emerged claiming that Atletico Madrid have offered Jackson Martinez to Arsenal this week. 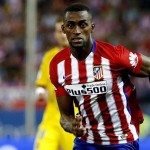 Atletico management are eager to sell Martinez, despite the Colombian only arriving in the summer from Porto.

A lack of goals and inconsistent form has failed to win over Diego Simeone, who has given his approval to Martinez’s departure.

Atletico have made contact with Arsenal and invited them to bid for Martinez.

Signed for €35 million, Vozpopuli says Arsenal intermediaries have indicated a willingness to pay €30 million for the striker.

Barcelona Will Bid For Cesc If Eto’o Moves To City