Arsene Wenger has admitted that Alexis Sanchez will not be rushed back into action for Arsenal. 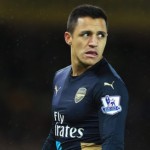 The Chile international forward last played for the Gunners in late November after being struck down by a hamstring injury.

Sanchez is due to return early in the New Year and with that still being the case, Wenger suggests he may not quite be ready to start against Stoke City this weekend although he is likely to be in the match day squad.

“I will be cautious now,” he said of Sanchez.

“There is an opportunity that he will be in the squad for Sunday. He will have a definite test on Saturday and Friday and Saturday will be two important days for him.

“It is not impossible that he will be involved.” Fabregas : Arsenal Told Me I Had To Stay

Arsene Wenger : Jack Wilshere Will Be Ready For Euro 2012