Reports are out claiming that Chelsea manager Guus Hiddink has insisted that his aim still remains placed to achieve a top-four finish come the end of the Premier League season. 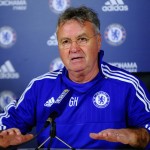 The Blues were delivered a setback on Wednesday night as they dropped further points in the 2-2 draw with West Bromwich Albion at Stamford Bridge but the Dutchman is holding hope that they can still sneak into the Champions League placings.

“We have said before that as long as it is possible mathematically to get fourth place then we will go for it,” said Hiddink.

“But then we have to win all our home games at least.

“You need to average 2.8 points per match – so you have to win your games at home.”