Reports are out claiming that Arsenal defender Per Mertesacker has stated that his teammates can be pleased with their effort despite the disappointing result against Liverpool. 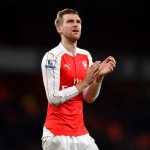 Arsenal and Liverpool played out a pulsating 3-3 draw at Anfield on Wednesday night and both teams displayed some wonderful football during the clash.

The Gunners were left a bit disappointed after conceding a last minute goal to Reds substitute Joe Allen but Mertesacker believes that some of the high-octane football played by the Gunners is a huge positive.

Mertesacker said: “It is what it is in the Premier League.

“It was an intense game and was back and forth and what we saw today was a brilliant display from two sides that gave absolutely everything to take the point.

“We showed great team effort – especially over the Christmas period. That is why we are at the top and we need to continue to take the points especially away from home and we have another chance on Sunday and the team is doing brilliantly and putting everything in.”