Reports are out claiming that Arsenal striker Olivier Giroud has stated that his side did not merit a victory over Liverpool due to their poor defensive display. 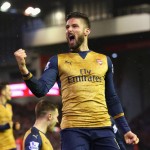 Arsenal played out an enthralling 3-3 draw against Liverpool at Anfield on Wednesday night and the Gunners would have been left a bit hard done by, after missing out on a chance to win following Joe Allen’s 90th minute equaliser.

However, the French international striker is making no excuses and has bluntly stated that the Gunners should not expect to win matches where they end up conceding three goals.

Giroud, who scored a brace, said: “It was a nice game for the fans because there was a lot of intensity and chances to score. But when you concede three goals in an away game, it is hard to win.

“We should have been stronger at the end because we did well in the second half. But we have shown some character to come back from 1-0 and then 2-1 down.”