Reports have emerged claiming that Arsenal teenager Chris Willock is hoping to get more opportunities to work alongside the Gunners first team. 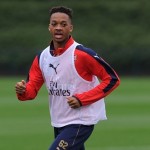 The 17-year-old was named on the bench for the recent FA Cup third round win over Sunderland and although he did not follow fellow youth academy stars Alex Iwobi and Jeff Reine-Adelaide into the pitch, he felt the experience benefitted him.

Willock is getting ready for Friday’s fourth-round FA Youth Cup clash with Swansea City with Steve Gatting’s side and is of the belief that the time spent with such players as Mesut Ozil will only help him prepare and perform at a higher level for the U18s.

“It was a good experience,” he told Arsenal.com.

“You work for those sort of things – that is the objective to get to the first team. Hopefully if I keep knocking on I can get onto the pitch soon.

“I’m getting closer because I was on the bench and I want more and more and more and hopefully it will come. I think training with the first team gives you a lot more confidence in these sorts of games and it is helpful.

“Mesut Ozil stands out for me the most, I like the way he knows what he is going to do with it every time he gets the ball. His technique is one of the best, I try to copy him and learn things from him in training.

“Working in the gym has helped me with the sports scientist and my body and confidence in my strength gives me more of a willingness to push on further. At the start of the season I needed to get more physical and I’m starting to do that and I’m trying to score more goals and I just want to push on even more now.”