It has been revealed that Manchester United midfielder Juan Mata has admitted that the absolutely loves playing football in England. 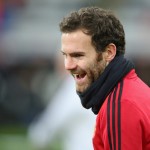 The 27-year-old Spanish international has expressed his love for the country and suggests every professional footballer should be attempting to experience the challenges of the Premier League.

“I enjoy everything about football in this country,” the former Valencia and Chelsea man said in an exclusive interview with Inside United Magazine.

“Since the moment I came over here more than four years ago, I have enjoyed every minute. I think it’s a great experience to play football here and I always say the same.

“I would advise any player in the world to try to play in the Premier League for at least one season and realise how big and how massive football is in this country. We’re talking about respect from fans, great organisation in the league… I really like it.”