It has been reported that Newcastle United striker Aleksandar Mitrovic has hailed the quality of Manchester United captain Wayne Rooney. 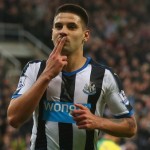 The England international star is only just into double figures after a painfully slow start to the season but his two goals in their 3-3 thriller made in four in the past fortnight for Manchester United.

“You can see on the pitch how easy he moves and how easy he plays. People who say he is finished are crazy. They are people who don’t watch football.

“If he doesn’t score for a few games or his team does not play well, they say that but for me, he is amazing. I think he can play for another 10 years.