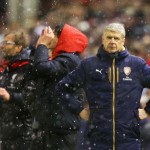 The Spanish giants, along with rivals Atletico Madrid, have been hit with a transfer ban that will come into effect in June, and still be in place next January.

That led many to claim Real Madrid will go on a spending spree while they are still able to register new signings.

But Wenger says: “I thought that [they would sign players now] at first when I heard the news.

“[But] they will appeal, they will cancel the ban and they will be allowed to buy in the next two transfer windows.

“That’s what will happen.”