Reports have emerged claiming that Arsenal hero Charlie Nicholas has welcomed the signing of Mohamed Elneny. 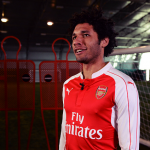 The 23-year-old Egyptian joined the Gunners from FC Basel this week and Nicholas believes he is the hard-hitting midfielder the club have been lacking in recent years.

“Elneny is a perfect fit for Arsenal and someone I’ve been screaming out for,” Nicholas told Sky Sports.

“At the start of the season Arsenal needed two positions filling, goalkeeper and a holding midfielder. They signed Petr Cech but never filled the other position, which was a bit of a mistake for me.

“Coquelin is robust and competitive and gets booked a lot, Mikel Arteta is not the player he was and Mathieu Flamini has done really well but he’s too similar to Arteta. Elneny fills that void.”