It has been revealed that Feyenoord striker Colin Kazim-Richards says Memphis Depay has the potential to be a star with Manchester United. 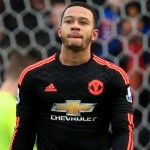 Depay, 21, has failed to shine at Old Trafford since joining from PSV Eindhoven for £25m last summer.

“He just needs to show what everyone knows, that he has potential to be one of the best in the world,” Kazim-Richards told De Telegraaf. “People forget what he is going through.

“He is just 21-years-old and it is the first time he’s lived outside Netherlands.

“I left my home as a 20-year-old and went to one of the biggest clubs in Turkey, where the fans are a thousand times worse if they think you are not doing well.

“But people find it great to love him and to hate him. I know exactly what is going through his mind because I’ve had that my whole career. Everyone makes everything bigger than it is.

“So what if he bought a Rolls Royce! So what if he has nice watches, or this girl and that girl. What’s the problem?

“People have to respect what Memphis does. He has the No.7 shirt, the most idyllic one at Manchester United. He came for €30 million, let him go through this process.

“Memphis needs to get used to having the ball every three minutes instead of every minute. He’ll come out of this stronger.”