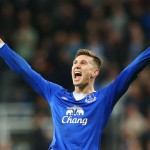 The Mail on Sunday reported that Barcelona sent a scout to watch Stones at Stamford Bridge on Saturday as they step up their bid to sign the Everton centre back.

The Spanish champions have been monitoring Stones’s progress since last season and sporting director Roberto Fernandez has received glowing reports.

The 21-year-old has been outstanding this season following a troubled summer when Everton steadfastly refused to sell to Chelsea despite offers of £38million and the player asking to leave.

Manchester United, Manchester City, Arsenal and Real Madrid are also interested in the elegant defender though Everton remain firm that they will not sell in January.

Gunners, City,Utd and Chelsea in for Sneijder