It has been reported that Peter Schmeichel does not believe Manchester United are good enough to win the Premier League this season. 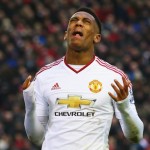 The Red Devils managed to pull off a smash-and-grab 1-0 victory over Liverpool at Anfield on Sunday with Wayne Rooney’s 78th-minute goal their only shot on target for the contest.

There have been a number of labouring performances under Louis van Gaal this campaign and despite their triumph on Merseyside, United do not have the quality to overhaul the likes of Arsenal, Leicester City and Manchester City according to club legend Schmeichel.

“I don’t think they can win the title,” he said on Sky Sports after goalkeeper David De Gea saved the Red Devils on a number of occasions.

“I don’t think the team is good enough and they don’t enjoy playing the way they do. It was three lucky points today.

“De Gea played exceptionally well and was key in keeping them in the game, and when you have a world-class player like Rooney, something can happen, and it did. That’s two positives from the game.”

Schmeichel added: “Van Gaal is very keen on telling us that they have done what they have trained, so praising himself.

“But if that’s the style of play that Man Utd has to play, then I don’t think they can win the league because you have to be really lucky every game.”