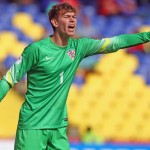 Reports are out claiming that Chelsea have bid for Dinamo Zagreb youngster Adrian Semper.

Dinamo manager Zoran Mamic confirmed that the Blues have had a very tempting offer knocked back for the 18-year-old goalkeeper.

Chelsea technical director Michael Emenalo has been in talks with the Croatian giants over the last few days but it looks like he is going to come home empty handed, says the Daily Star.

Mamic said: “For the last few days, Chelsea representatives have been in Zagreb, where they have prepared – I must admit – a great offer for Adrian Semper.

“We thanked them [for the offer]. They were highly professional and pleasant people, but we said ‘no’.

“It is never easy to reject such a big offer for a young player, but we are convinced Adrian has a fantastic future ahead of him and we want him to spend at least some of that future with Dinamo.”