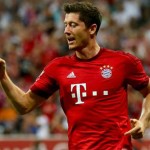 The Poland international, who has been linked with Arsenal, says he grew up idolising Gunners legend Thierry Henry.

“I have always taken my cue from Thierry Henry,” he told Telefoot.

“This is my childhood idol. I have always looked to him when he played.

“His technique and speed … It always impressed me.”