Reports have emerged claiming that Inter Milan have released Nemanja Vidic from his contract. 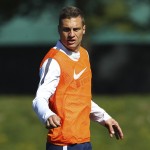 The former Manchester United captain has not played for Inter this season.

“FC Internazionale announces that it has reached an agreement with Nemanja Vidic for the mutual termination of his contract,” an Inter statement confirmed.

“The Serbian defender, with Inter since July 2014 racked up 28 appearances in Nerazzurro last season, scoring once.”

The club’s official website also carried a message from the centre back.

“I thank the Nerazzurri family and the Inter fans. I wish the club great success in the future. Always, Forza Inter!” It Is Normal That Rooney Does Not Know Me – Anthony Martial

Paul Scholes Wanted To Play For England In The Euros