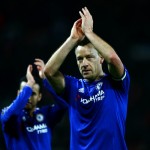 The London Evening Standard claims that the hierarchy have already put it on their to-do list ahead of the summer.

No formal talks have taken place yet, but Chelsea don’t want to see another experienced player leave the club and want to agree another 12 month extension before the end of the campaign.

It has been acknowledged behind the scenes that Chelsea have suffered from a lack of leaders in the dressing room and can ill afford for Terry, the most experienced of them all, to go too.