It has been revealed that Manchester United defender Chris Smalling is impressed by young teammate Cameron Borthwick-Jackson. 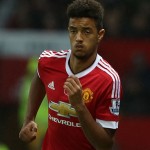 The 18-year-old replaced the injured Ashley Young in the 42nd minute to cries of ‘Who?’ from the Kop to make just his sixth senior appearance in the 1-0 victory.

“I think it showed he is ready for a stage like this,” Smalling said.

“He has been drip fed quite a few games this season and he has done very well, and to be able to stand up here and perform like he did shows he is ready for any game. Because if you can perform here you can perform anywhere in the league.”