Reports are out claiming that former PSG defender Alain Roche admits Edinson Cavani’s frustrations can become a problem for the club. 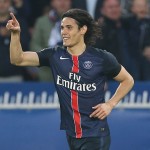 Cavani is upset being forced to play on a flank to accommodate Zlatan Ibrahimovic and has made his feelings clear to management.

Roche told Canal+: “Cavani? The problem is not new. He’s often said in the press that he wants to play centrally. A month ago they had already said he was dissatisfied with his position.

“We said nothing, but there was a meeting organized to discuss his case. This was confirmed by PSG staff. So there is a problem with Cavani.

“If there is a problem in the group, it can become a concern.” Micah Richards Determined To Fight For His Place At Man City