It has been revealed that James Rodriguez is working his way out of Real Madrid. 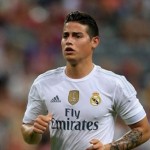 With Manchester United and PSG eager to take James off Real’s hands, sources in Colombia say the Madrid giants are ready to cut their losses.

The public show of frustration from Real coach Zinedine Zidane towards James during victory over Sporting Gijon was only the tip of the iceberg.

Real directors are also concerned with James’ behaviour off the field, with the Colombian a regular at Madrid’s celebrity nightspots.

The club is also waiting for developments from local police after James led them in a high speed chase to the training ground a fortnight ago.

The Colombian has been linked with a €60 million move to United this month.