Reports have emerged claiming that Chelsea have offered Pedro to former club Barcelona. 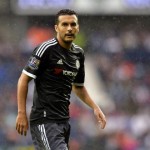 Sport revealed that the Spanish international winger was offered to Barca on loan for the remainder of the season.

Luis Enrique is said to have knocked back that deal, insisting on signing Celta Vigo star Nolito instead.

Enrique only has eyes for the La Liga winger, who has scored eight times this term.

He has also reportedly turned down a move for Salzburg’s Jonathan Soriano and Villarreal’s Denis Suarez is another winger being linked. Marco Reus To Turn Down Man City For Barcelona Move