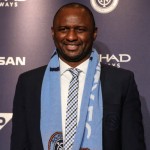 Vieira admits he still has a lot to learn, but will use some of the traits of both Arsene Wenger and Jose Mourinho to help him develop.

Vieira, who also played under Mourinho at Inter Milan, said: “I’ve been very lucky playing under managers and spending time with them and learning from them.

“Something I like about Mourinho is his preparation before a game. He was giving players key information about the strengths and weaknesses of the opposition.

“I like Wenger with the freedoms he was giving to players to express themselves on the field.”