Reports are out claiming that West Ham are willing to wait for Olympique Marseille striker Michy Batshuayi. 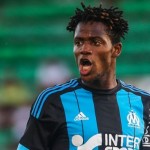 The Daily Mail says they have identified the £20million-rated Batshuayi and are ready to turn to agent Mark McKay to help.

McKay was credited by co-chairman David Sullivan for being instrumental in the signing of Dimitri Payet from Marseille and West Ham hope to utilise his strong relationship with Marseille president Vincent Labrune again to steal a march on rivals in the summer.

Arsenal and Tottenham have also been following Belgium international Batshuayi who has scored 15 goals this season.