It has been revealed that Barcelona are preparing a summer bid for Arsenal midfielder Aaron Ramsey. 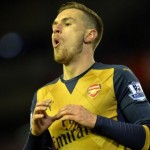 The Daily Express says the Spanish giants have made the Welsh ace one of their primary targets and are confident of securing his services.

Sources claim the Gunners won’t deny Ramsey the chance to join the likes of Neymar, Luis Suarez and Lionel Messi at the Nou Camp.

The Wales international has been in good form again this season scoring four goals and providing two assists in 17 Premier League appearances.

Scouts were present to see him in action in the 3-3 draw with Liverpool on Wednesday evening as they prepare a raid.