Southampton boss Ronald Koeman has admitted that he is keen on the Chelsea job. 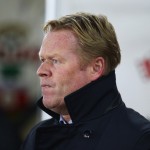 Koeman has revealed he wants countryman Guus Hiddink to back him to be the next Chelsea manager.

Southampton’s Dutch manager says he is ambitious to work at a big foreign club and said: “If Guus puts a good word in for me, that would be a big influence.”

Koeman remains keen to return to the top of the game and told Dutch radio: “It is certainly something that I always have at the back of my mind.

“I always want to achieve the highest possible level. That has happened in Holland and that’s what I’d really like to achieve abroad.” Jose Mourinho Receive Encouragement In His Pursuit Of Radamel Falcao