Reports are out claiming that Bayern Munich have set their asking price Robert Lewandowski. 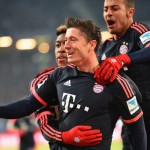 The Sun reported that Lewandowski’s Premier League suitors may have to splash over £75m to sign the Bayern Munich striker this summer.

Manchester United, Arsenal, Chelsea and Liverpool have all been linked with a move for the Polish hotshot — while a potential reunion with outgoing Bayern boss Pep Guardiola at Manchester City has also been mooted.

But Ligue 1 giants Paris Saint-Germain believe the in-form frontman will be the perfect replacement for outgoing icon Zlatan Ibrahimovic. Craig Bellamy Wants Liverpool To End The Season On A High