Reports are out claiming that Arsenal defender Laurent Koscielny says their Emirates form is key to this season’s success. 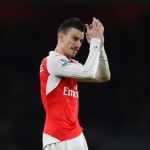 Only West Ham have managed a victory at the Emirates so far this term, stunning Arsenal on the opening weekend of the season.

“If you want to win the Premier League, you need to win all your home games,” he told the club’s website.

“Our seven away games will be very difficult because we play against Man City, Man United, Tottenham, West Ham, Everton, so we need to do the job well at home so we have the points.

“This weekend (against Chelsea) is an important game and next weekend too, because it is the FA Cup and we won it twice and we want to continue like this.”