Reports are out claimingt that Manchester City remain in the hunt for Athletic Bilbao striker Inaki Williams. 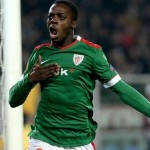 The Sunday Express claims that the 21-year-old, who is also a target for Arsenal and Liverpool, is being chased hardest by City.

Williams has just signed a new contract at the Spanish club with a release clause of £37.8m but that has not stopped Manuel Pellegrini from going after the youngster.<> Real Madrid are also monitoring Williams and could provide competition to the Premier League trio.